Hi, I'm Megan Mansfield! I'm a NASA Sagan Postdoctoral Fellow at Steward Observatory at the University of Arizona, where I work with Professor Dániel Apai. My research broadly focuses on the spectroscopic characterization of exoplanet atmospheres. I use a variety of ground-based and space-based telescopes to detect molecules in exoplanet atmospheres, and I use these detections to study planetary formation, physics, and chemistry, including studying the habitability of small, Earth-sized exoplanets.

I got my Bachelor's degree from Massachusetts Institute of Technology in 2016, with a dual major in Physics and Earth, Atmospheric, and Planetary Sciences. I received a Ph.D. in Geophysical Sciences from the University of Chicago in 2021, where I worked primarily with Professor Jacob Bean. My thesis work focused on both observations and modeling of highly irradiated exoplanets, ranging in size from Earth-sized terrestrial planets to gas giants larger than Jupiter.

Outside of work, I like to run, cook (especially foods with chocolate and peanut butter), and dote on my cats, Orion and Luna. I also sing and play viola, and occasionally spend too much time thinking about Taylor Swift's latest music.

My research broadly focuses on the spectroscopic characterization of transiting exoplanet atmospheres. I use a variety of ground-based and space-based observations to study planetary formation, physics, chemistry, and habitability. You can check out a recent talk I gave on some of my research here. Here are a few of the specific projects I've worked on recently:

The James Webb Space Telescope (JWST), which launched in December 2021 and began taking data in July 2022, is already revolutionizing our understanding of exoplanet atmospheres. As part of the Transiting Exoplanet Early Release Science Team, I contributed to an in-depth study of the hot Jupiter WASP-39b with JWST. This study was designed to precisely characterize the atmosphere of WASP-39b while also testing out different instrument modes to provide guidance to the exoplanet community about which observing methods work best for exoplanet observations with JWST.

The first results from this program were recently published in a set of six papers. We detected new molecules never before resolved in exoplanet atmospheres, such as carbon dioxide and sulfur dioxide. In addition, the detection of sulfur dioxide indicates the presence of active photochemistry (chemical reactions driven by interaction with the star's light) in the atmosphere of WASP-39b, because without photochemistry that molecule would not be expected to be detected. This is perhaps the most in-depth study of an exoplanet atmosphere ever conducted and demonstrates the incredible potential of JWST to revolutionize the field of exoplanet atmosphere characterization!

Interested in learning more about this amazing result and some of the folks who made it possible? Check out the NASA press release here, a University of Arizona press release summarizing the contributions of some Arizona folks here, and a YouTube video by Ryan MacDonald summarizing the science here! 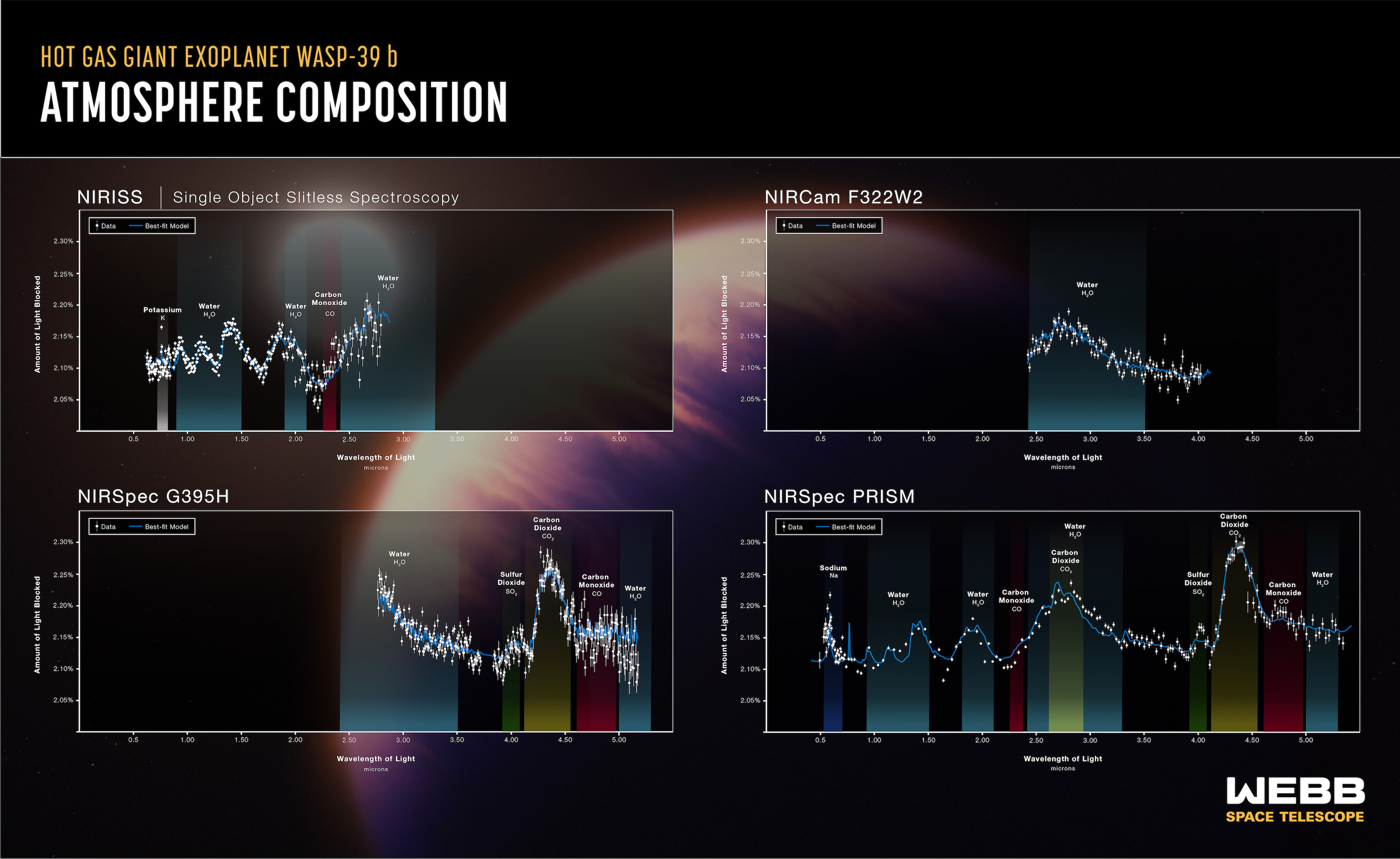 JWST will give us the first chance to observe the atmospheres of habitable exoplanets in detail, and even search for biosignatures. In order to make the best use of this resource possible, my collaborators and I conducted a study to identify the most efficient method for identifying terrestrial planets hosting atmospheres (see the papers here). We found that secondary eclipse photometry using JWST's MIRI instrument could identify atmospheres in as little as a single observation. The basic idea behind this method is that a planet without an atmosphere will have a dark, hot surface. An atmosphere will act to decrease the observed dayside temperature by either hosting high-albedo clouds and/or transporting heat to the nightside.

I will be applying this method to observations of the hot terrestrial planets GJ 1132b and Gl 486b this year. These planets are likely too warm to be habitable, but measuring whether they have atmospheres will provide an important constraint on whether terrestrial planets orbiting active M dwarf stars can hold onto atmospheres at all for long enough to develop life. The data will be arriving in the spring/summer of 2023, so stay tuned for updates!

Much of my research has focused on understanding the thermal structures of hot Jupiters, which are hot gas giants orbiting close to their host stars. (Seriously, these planets get really hot!) Recently I conducted a population study of all of the hot Jupiters which have been observed in secondary eclipse with the Hubble Space Telescope (HST). I created a metric to quantify the strength of the water features observed in absorption or emission in these planets' HST spectra. The observed planet population (shown in the figure below) roughly agrees with predictions from self-consistent 1D models. However, the data show substantial scatter in their water feature strengths, which we think may be due to compositional differences in their atmospheres. See the paper here for more details! 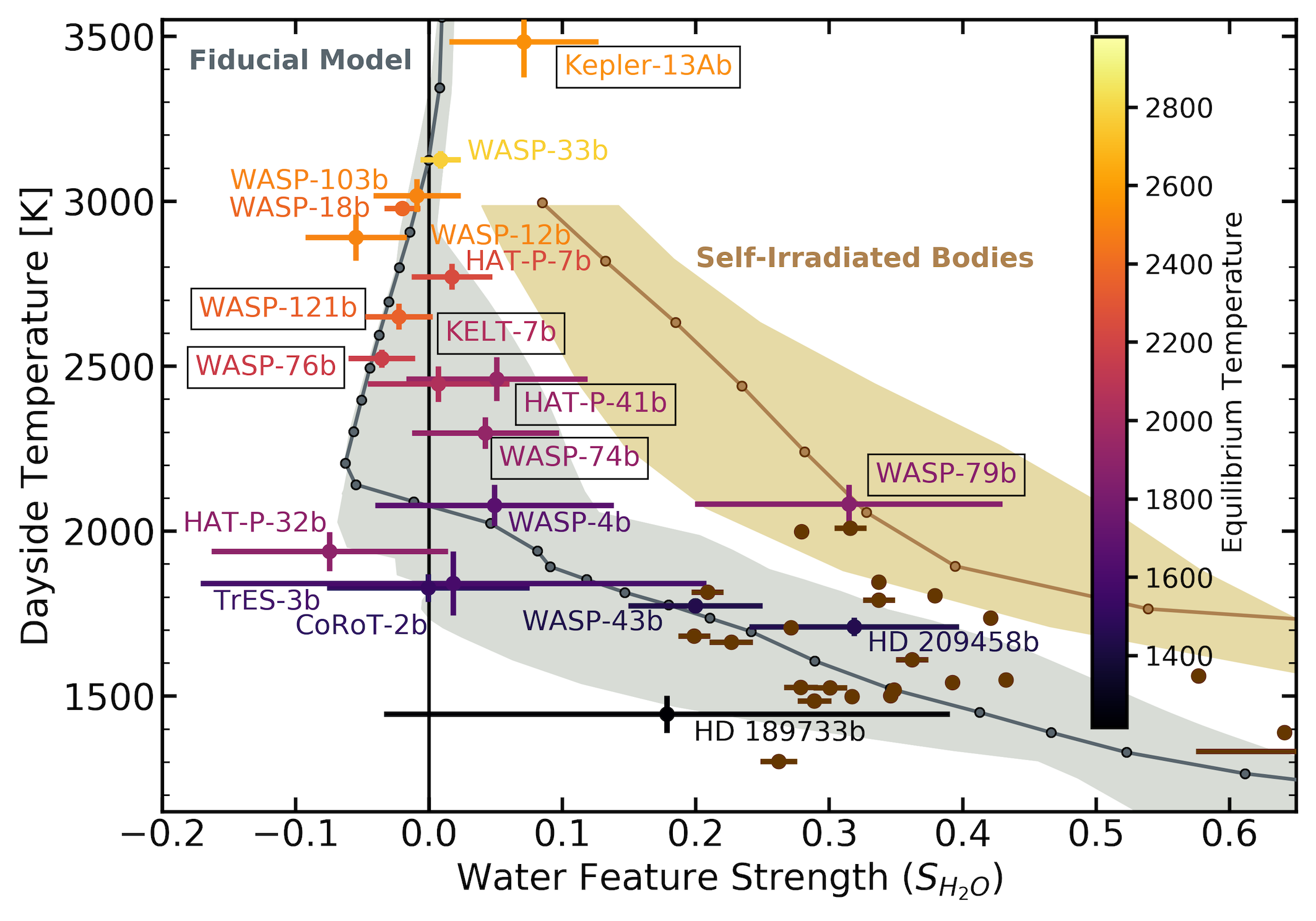 A new technique that is being used to study exoplanets is ground-based, high-resolution observations. These observations rely on the fact that the exoplanets we're looking at are moving quickly around their host stars. This motion induces a Doppler shift in their absorption lines, so when you're observing a planet from the ground you can use that shift to separate out lines originating from the planet and those which belong to the star or the Earth's own atmosphere. Once you have the planet's lines separated out, you can use cross-correlation to detect signatures of individual gases such as carbon monoxide and water, and compare your observations to models to measure their abundances.

I'm currently leading a high-resolution survey of 12 transiting exoplanets using the Gemini-S/IGRINS spectrograph, which is located on Cerro Pachon in Chile. The goal of this survey is to precisely measure the abundances of key gases such as water in these exoplanets' atmospheres and to look for trends in abundances with parameters such as planet mass. This survey is ongoing, so keep an eye out for results soon!

Most techniques for observing exoplanets produce a measurement that is averaged over a significant portion of the atmosphere, because these planets are too far away to be spatially resolved. However, the technique of spectroscopic eclipse mapping can resolve exoplanet atmospheres in three dimensions - latitude, longitude, and altitude. This is done by observing the planet during the ingress and egress of the eclipse, when it segment by segment disappears behind the star and segment by segment reappears. By combining these data, you can create a 2D grid in latitude and longitude across the dayside. Observing at different wavelengths extends this grid to a third dimension, as different wavelengths will probe different altitudes in the atmosphere.

I led the development of a technique to interpret spectroscopic eclipse mapping data from JWST. I'm currently applying this technique to get the first resolved 3D measurements of the daysides of hot Jupiters, so keep an eye out for results soon!

I love sharing science with people of all ages! Below are a few links to interviews or recorded talks you can use to learn more about exoplanet atmospheres. If you're interested in hearing more about my work or exoplanet science in general, please get in touch!

If you prefer reading to listening, you can find here a New York Times article featuring my work using JWST to search for life on other planets. (Note the article may be behind a paywall.)

Have a young astronomer interested in exoplanets? Here's a discussion myself and fellow astronomer Tom Beatty had with some young students about JWST and the search for life in the universe. Talks and Q&A are aimed at a 6th - 8th grade audience.

Interested in learning more about JWST and the science I'm currently doing? Here's a longer public lecture I gave at University of Arizona's Steward Observatory in April 2022 on using JWST to search for habitable planets, aimed at a broad audience.